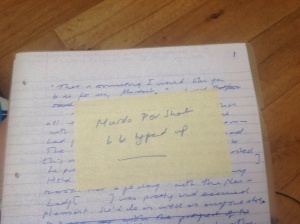 2014 has been a pretty good writing and publishing year for me. I published two novels, two novellas and a (very short) short this year which is a pretty good output for me given my work and family commitments.

In terms of next year’s output, I have notebooks full of ideas for future projects – some of those are stories I’m desperate to write and others are stories I’m interested in more for the challenge they pose.

When I think about it, pretty much everything I’ve published has had something in it that’s been some kind of challenge. My first book featured a woman masquerading as a man – I began writing that book after reading a few blogs that talked about this being a trope readers struggled with because they found it difficult to believe a woman could successfully pass as a man. My second book featured that most loathed of romance characters, the philandering husband (I genuinely love the hero of that book but he’s been roundly despised by many readers). With the first book of the Enlightenment series, I wrote a romance with no HEA or even an HFN and that really bothered some readers (but I genuinely felt it had to be that way) and across the broader arc of all three Enlightenment books, I set myself the challenge of creating an ultimate HEA for two Regency men that readers could really believe in and have the same sense of pay off as from a het historical. With my more recent stories – The Dream Alchemist and Rest and Be Thankful – the challenge has been in the change of genre. I’ve discovered that paranormal and contemporary genres present vastly different challenges than historical… and that no genre is easy…

In terms of what I’m writing right now, I’m in the luxurious (I think) position of writing something that is both a real book of my heart and a new challenge. This is Captain Iain Sinclair’s book. Readers of Seasons Pass will have briefly met Iain and his love interest, James Hart. James and Iain have known each a long time so I’m trying to tell their story in two interwoven narrative strands – the ‘present’ strand (1824) and a second strand which shows how their relationship has developed between 1808 and 1824. This is not an easy way to write a story, but it gives me lots of opportunities to set up satisfying emotional pay offs – if I can get the tension and the pace if it right (I’m a firm believer that so much in romance is about pace and timing). That novel will come out late 2015.

Well, I was nominated in Dabwaha which was very cool, though I went out after round 2 (albeit respectably, to the eventual winner, Captive Prince 2). Oh, and I attended my first conference, the UK GLBT Fiction Meet in Bristol where I met some fabulous people, such as Susan Lee, K J Charles,  Sam Higson, Liz Whinder, Helena Justina,  Rachel Maybury, Clare London, Jo Myles, Elin Gregory, Johanna Ollila, Jordan Castillo Price, LA Witt, Aleksander Voinov, Charlie Cochrane, Calathea, Jay Northcote – the list goes on! It was a great meet and I hope to be at the next one in September next year, all going well.

I loved doing my two anthologies. It was a thrill to see my stories published with other writers I highly rate. In both cases, I felt very much like the ‘junior partner’ in the line up (which felt quite a luxurious place to be in all honesty). Hopefully, these anthologies have introduced my stories to a few new readers.

Another new-to-me for 2014 has been self publishing, which I dipped a toe into the water of with the Comfort & Joy anthology. Having had my hand comprehensively (and generously) held through that process, I plan at least one self pubbing venture in 2015. I have to say, I love working with my publishers, Samhain, but I would like to put something out before the Iain and James book, hopefully around summer time and self pubbing is the best way to achieve that, given the timetable I’m working with.

Is there anything you’d particularly like to see from me? Genre? Characters? Tropes?